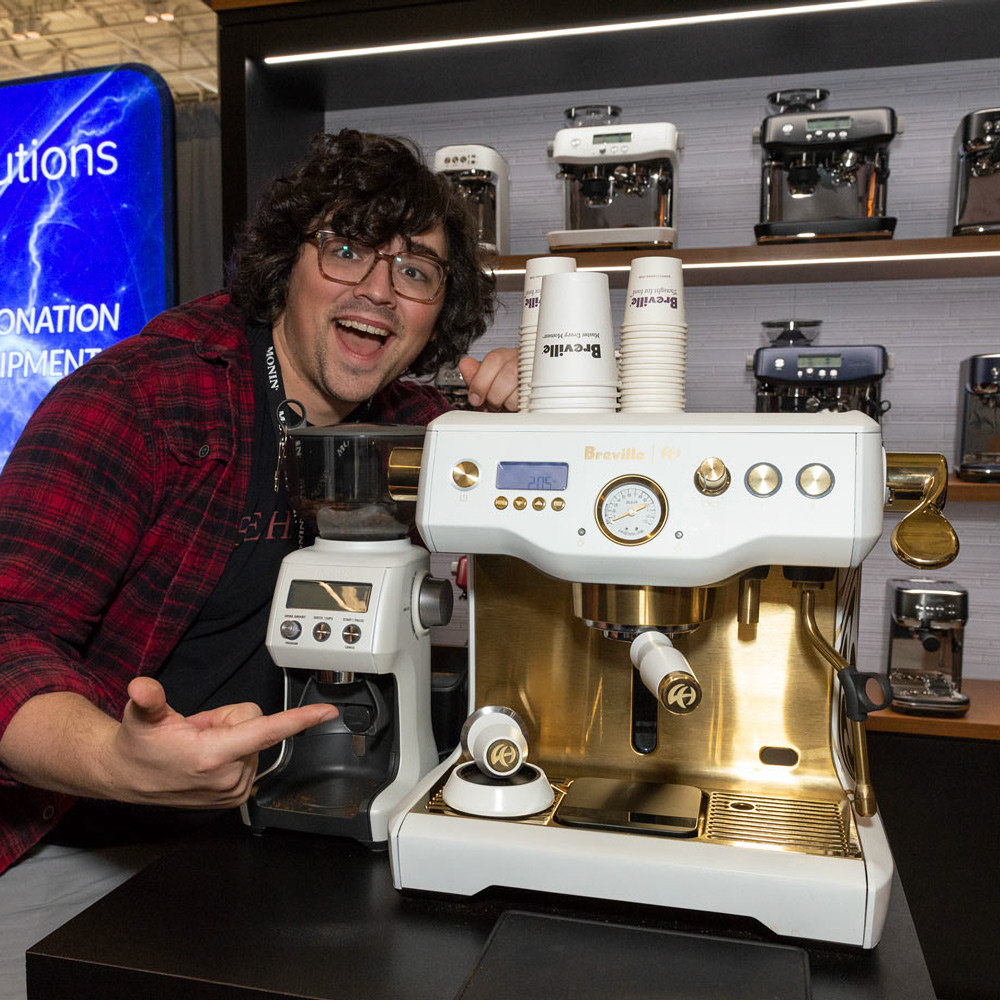 Lance Hedrick has worked in coffee for over eight years, and during that time he competed in various barista competitions, latte art throw downs, and brewers cup championships. Additionally, he has trained hundreds of baristas in the United States and outside the country. He is a two-time world latte art champion, as well as being an all-around great guy.  We have known Lance for some time, and he has consistently impressed us as a great teacher, motivator, and someone who understands the world of coffee.

We first met at Specialty Coffee Expo in 2017 through Onyx Coffee Lab. Onyx Coffee is one of the most respected roasters in the United States, and was founded by Jon and Andrea Allen.  Artpresso approached them before Expo, asking if they could recommend a barista who would join us at our booth. Andrea suggested that Lance might be available. When Lance arrived at our booth, I was impressed with both his kindness and the ease of our conversation. I was grateful for the assistance we received from him to meet with visitors and share his expertise. From the moment I first saw him make coffee with our products, I noticed he was a natural teacher.

Lance quickly became a trusted source and friend who could provide invaluable expertise. He is a coffee expert, and his passion for sharing that knowledge with others comes through in everything he does. Also, he has a vision for the future of coffee and wants to make sure that everyone can enjoy really good coffee.

To realize his vision, Lance created a YouTube channel full of educational content—from basic how-tos for beginners all the way up to advanced topics for professional baristas —to help people make the best cup at home regardless of their level or budget. He has a knack for explaining complex concepts in simple terms and helping people build confidence in their skills through practice.

As he interacted with his viewers, Lance realized that many home baristas own a 54mm Breville espresso machine and would be interested in customized options—but were struggling to find products they liked.  This insight led him to contact Artpresso Design and work with us on distinctive customizations and precision barista tools for Breville’s 54mm espresso machine.

Artpresso designed a line of products that including a bottomless portafilter, coffee tamper, hopper lid and grinder and tamp holder cover—all made for the 54mm Breville espresso machines and the Breville grinder.

The idea behind this collaboration was to offer high quality innovative products to Breville espresso machine owners.  With a focus on elevating the performance and beauty of espresso making.  Each product is created with intentionality and attention to detail.

Our bottomless portafilter combines a Breville compatible 54mm stainless steel portafilter cast with an ergonomically designed handle to deliver comfort and performance. This handle design helps the portafilter basket stay level during the tamping process. This product is precisely crafted from American hardwood with a clear coat finish and features a white or black stainless-steel end cap with the Lance Hedrick logo.

The Revo B Coffee Tamper

The Revo B Tamper’s ergonomic design forms to your hand and helps with the alignment and posture required to distribute tamping pressure evenly. Its 53.5mm diameter low profile stainless steel base is precisely machined to maximize performance when using a 54.0mm portafilter. These advancements increase a Barista’s ability to feel the top edge of the portafilter basket to support level tamping and reduce vacuum. The Revo B Tamper is offered in a durable white powder coat and black anodized aluminum handle topped with a beautiful laser etched inlay.

Baristas using a separate coffee grinder can finally remove the empty hopper from their Breville Barista Express and Touch espresso machines and replace it with our Grinder and Tamper Holder Cover.  This inventive customization includes an internal burr cover and external grinder cover with a 54mm tamper holder. The internal burr cover is precisely machines to maintain the functionality of your Breville espresso machine. The grinder cover features a durable plastic tamp holding station.

To learn more about Lance’s mission, visit his YouTube channel.

His videos are beautifully shot and Lance’s passion for coffee is evident. I highly recommend watching them if you’re interested in learning more about the process of crafting a great cup of coffee.

Thank you for signing up!